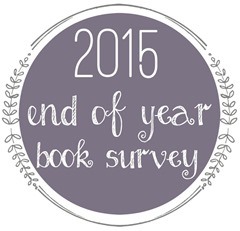 As I did last year I am participating in the end of the year book survey this year as well. It's hosted by Jamie . Today I'll show you the first part of my survey, my bookish bests and stats, and tomorrow you'll see my answering question surrounding my reading/blogging life and things I plan to do in 2016.

Number Of Books You Read: This year I set my goodreads goal for 120 books, which I thought would be hard enough, but I surprisingly managed to fulfill this challenge in November, so now I've read 130 book (written December 22th), which is a little bit more than last year.
Number of Re-Reads: Sadly, I only managed to reread 5 books in 2015, although I planned to reread more. However, I'll try to do so next year.
Genre You Read The Most From: Fantasy and Fairytale retelling were my most read genres this year, which isn't much of a surprise. Both are my favorite genres and I'm happy to see that I was able to explore many different books being fantasy or a fairytale retelling.

1. Best Book You Read In 2015? I already presented you my favorite 15 books of 2015, which you can find in THIS post. Nevertheless I'll try to split it up into different categories (and not to cheat) (categories by The Daily Prophecy)

Nooo....those are not too many categories. No, I didn't try to cheat. It's all in your head.

2. Book You Were Excited About & Thought You Were Going To Love More But Didn’t?
As I just visited my friend and we had our annual #Marvelthon I'm still pretty much in my fangirling mood. I love Marvel, especially the Avengers. My favorite one is Black Widow, and as a passionate reader I was super excited for her novel, as I just love her in the movies. But Black Widow Forever Red - Margeret Stohl was quite the book I hoped for. I was bored like hell and Insta Love and her friends only made it worse. Also Red Queen - Victoria Aveyard disappointed me very much, although it was one of my most anticipated reads 2015. It was just ridiculous and annoying.

3. Most surprising (in a good way or bad way) book you read? In a good way: Dreams of Gods and Monsters - Laini Taylor I didn't like the first installment of the Daughter of Smoke and Bone series, but was surprised by the second nevertheless. I found it pretty interesting and loved the way the story changed. However, I didn't have high hopes for the last book, but it blew me away and made the series become one of my favorites. In a bad way: A Whole New World - Liz Braswell. Gosh I was so thrilled for her new series, where she twists traditional Disney movies, but this was a disaster which didn't feel like Disney or magic at all.

4. Book You “Pushed” The Most People To Read (And They Did)?
I managed to pursuad two people the read The Phantom - Susan Kay. And now I have an amazig new fangirl (Jasi ♥)


6. Favorite new author you discovered in 2015?
I'm super happy I finally managed to read a Holly Black book, as well as a Jackson Pearce book. Both are very well known authors and loved for their works. I'm very happy I enjoyed their books and that I'm looking forward to read more from them. I also discovered Edith Pattou, I very UNknown author deserving a lot more attention as she writes absolutely beautiful.


8. Most action-packed/thrilling/unputdownable book of the year?
One of the most action-packed books I read was Shadows of the wolf - Tim Hall. It was impossible to put down and I literally flew through it. Which is actually pretty sad as I have to wait for the sequel more than a year.

I really hope that I'll be able to re-read the whole Lunar Chronicles Series, because it was so hard for me to finally finish the series after so many years I spent waiting every book to come out, after so many years of fangirling and raving. That's why I'm hoping for a big re-read, maybe next year at Christmas.

10. Favorite cover of a book you read in 2015?
I absolutely love the cover of Crimson Bound - Rosamund Hodge. It's even more beautiful than Cruel Beauty, which earned the title last year.

11. Most memorable character of 2015? That would be all my Raven Boys and Blue from The Raven Cycle. It's absolutely incredible how deep their friendship flows. They go through hell for each other, and even if they have their difference, they still manage to be a team and be there for each other.


12. Most beautifully written book read in 2015?
The strange and beautiful sorrows of Ava Lavender was a masterpiece, written by Leslye Walton. Walton has a way of making words painting pictures in your head, telling a story with making you feel warm and home. Her books are like bitter-sweet fairytales, poetic and emotional at once.

13. Most Thought-Provoking/ Life-Changing Book of 2015?
I think the book I'm currently reading earns this title more than any other book. I am Malala makes me think about humanity, education and emancipation in another way, she's able to wake thoughts buried in my head and without sounding like an instructor she presents her thoughts on many important issues.

14. Book you can’t believe you waited UNTIL 2015 to finally read?
The Raven Boys - Maggie Stiefvater! The series was released quite some time ago, but it took me until 2016 to finally pick it up. I really can't explain why, as Stiefvater is my favorite author and the book intrigued me very much. However, I'm super happy I finally managed to read it.

17. Book That Shocked You The Most
Shadow of the Wolf had many cruel ways of driving me crazy! Jesus, how can one book be that much of a twisted and surprising story?

19. Favorite Non-Romantic Relationship Of The Year.
Roar and Aria from Under the Never Sky. I just love that Rossi decided that she wouldn't need a love triangle and instead of creating an uncomfortable love story she would just make the other guy the girl's best friends. They're awesome together!

20. Favorite Book You Read in 2015 From An Author You’ve Read Previously.
I really enjoyed the new books of Leigh Bardugo (Six of Crows) and Sarah J. Maas (A court of thorns and roses). I was afraid that they wouldn't be able to keep up with their other series, which are brilliant, but luckily that did an amazing job.

21. Best Book You Read In 2015 That You Read Based SOLELY On A Recommendation From Somebody Else/Peer Pressure:
My grandma forced me to read East, as she gifted it to me and wanted to know whether I liked it. I'm so glad she did, otherwise this amazing book would have slept on my TBR for way too long.

22. Newest fictional crush from a book you read in 2015?
Khalid from The Wrath and the Dawn is a very twisted and interesting character, with many different layers of personality. I really like that you have to dig deep to see the soft boy and the hard body.

23. Best 2015 debut you read?
I am so bad at keeping track of debuts...but if Station Eleven is one, which I really hope, then let me tell you that it is fantastic and I loved everything about it!

24. Best Worldbuilding/Most Vivid Setting You Read This Year?
Since I read the Grischa trilogy, Ravka is my most beloved fantasy world. I just can't get enough of it and it would be just amazing to spend one day there. However, in Six of Crows I was able to discover even more of this astonishing world, which made my amazement grew even more.

25. Book That Put A Smile On Your Face/Was The Most FUN To Read?
Studium Emotionale was totally out of my comfort zone but turned out to be hilarious!

26. Book That Made You Cry Or Nearly Cry in 2015?
Well...every book? Especially finishing my favorite series, the Lunar Chronicles, made me super sad and I'm still getting tears in my eyes when I think about our last adventure with this amazing crew.

28. Book That Crushed Your Soul? Renee Ahdieh – The Wrath and the Dawn. It was very much like Ignite me in some ways, and it knew terribly well how to destroy me.

29. Most Unique Book You Read In 2015?
I agree with Mel and many other people who answered this question. You can find something unique in so many books I mentioned above. They made me fell in love with them, each one with their own way of writing, story line and character development. Their all unique and amazing.

30. Book That Made You The Most Mad (doesn’t necessarily mean you didn’t like it)?
An Ember in the Ashes. Honestely, why did you even care to sell it as a standalone?